Mooli Paratha & A scary night and a memorable breakfast...

Final day of our semester exams-friends talking animatedly amongst themselves-naughty giggles-hurried shopping…The reason - we were leaving on a tour that evening ,to visit a few places in North India. Freedom at last –even if it was just for 20 days. Yes, freedom from exams, boring lectures and of course, freedom from parents!!!!

One of the places we visited was Udaipur –the beautiful city of lakes. We strolled through the beautiful road facing the ‘lake palace’. It was a magical place and looked like a page out of a fairy tale. After a camel ride and visiting a few more beautiful places we were ready to resume our journey to another city.

We got into the bus that the guide had arranged for us and I looked at the packed food that the hotel had provided us. A packet of chapathi with mango pickle.It looked dry and I was in no mood to eat it.Most of us had just finished off some chaats and the dry chapathi didn't look very inviting.

As we began our journey,we started playing the usual games in groups and started singing and dancing[yes,in the bus itself] and then when we began to feel tired, settled to our seats and began the typical conversations like who bargained to the lowest to buy something,who got what for her family and the like between friends.

We were traveling on the Ajmer highway. It was nearing midnight and we had planned to cut a cake that we had got to celebrate Christmas .Exactly when my friend was about to cut it, we heard a big ‘bang’ and the bus swerved.

Many of us screamed and I thought we had met with an accident. The driver managed to bring the vehicle under control and stopped by the roadside. We were informed that one of the tires had burst. Thank God, there was not much traffic on the highway and hence no causalities.

Just around that time, I realized the Pav Bhaaji I had in the evening almost vanished and I was hungry again.I didn't even want to think of the stale chapathi and most of the snacks we had purchased in Udaipur was long gone. Most of my friends were in the same situation. We shared a piece of cake and waited to resume the journey.

All our hopes were shattered when the driver announced that any chances of changing the tire would be at dawn. I looked around and saw that we were stranded in a place that looked like a forest with rows and rows of trees and that too in the middle of the night without a single soul in sight.

Suddenly someone mentioned about bandits and we shrieked.We were around 40 girls and a lady guide,sitting in that bus and the 2 guys who were with us[the driver and the cleaner] didn't look like they would protect us from the thieves,in case they sprang up from nowhere.

There was not a single light on the highway.The occasional hoot of the owl and noises of the insects we more than enough to scare us. Every single sound made me jump.I wished more than ever that I was sleeping in that cozy hotel we had vacated earlier ,without fear and dreaming of all the beautiful places we had seen.

There were hardly any vehicles passing that way and all the fun and laughter that was heard minutes ago had died down to a whisper.A few lorries sped by after a while and a some of them who stopped to help us could not change the tire.Our driver was left with no choice but to go and look for a mechanic at day break.

Somehow we managed to spend the cold night[it was winter] in the bus and by morning the driver got some help and much to our delight informed us that there was a dhaaba nearby.That was the best thing we had ever heard and immediately started walking in the direction of our ‘saviour’.

The mere sight of the dhaaba signaled warmth, comfort and scrumptious food. There were wooden cots to sit upon and a wooden plank placed across the width of the cot to keep dishes.
Seeing 40+ hungry people,the dhaaba owner and the cook were delighted and started taking the orders and I must say ,the food appeared on our 'table' pretty quick.
We[my 2 friends and me] ordered all what we wanted-parathas,kulchas and some titbits- without even thinking if we would be able to finish them. Soon there was a delicious spread in front of us. The first ones to appear on the 'table' were Mooli parathas and dhal ,Kulcha and chole.
I started off with the Mooli parathas and dhal.The aroma was more than enough to seduce me.The mooli parathas and punjabi dhal tasted divine. Never did I know I could polish off so much food in such little time. Parathas were washed down with a cup a hot chaai[Indian tea]. I did eat the kuchas but the parathas had a carved a special place in my heart.
We sat there lazying around and taking sweet nothing ,basking in the warmth of dawn till our bus was ready to take us to the next stop-Jaipur.The weariness of the previous day's experiences were nowhere in sight once we had our fill of the yummy food.

Later when we re-started our journey I noticed numerous dhaabas dotting the roadsides.The food was inexpensive and definately had a 'home-made' touch..

I can never forget this trip as it was the last one that I went out together with all my friends.Often I think about the tour and want to try out mooli parathas but never got around to making them.But I did make them for IFR-Memories hosted @ Indian food rocks ,where Manisha asks us to share a recipe that brought back a memory and specifically asked for a dish that was not tasted for a decade.

Mooli paratha hasn't found its place in my table and also my moms[until my wedding,maybe even now it doesn't],so I prepared this last week to re-live those wonderful moments that I shared with my friends on a road side dhaaba enjoying the tasty food laced with giggles and chitchat.

Radish or Mooli as it is called,is one vegetable that I rarely buy.Even if I do it goes into the sambar.This time,I got Mooli just for Manisha's event.As with any recipe this one has numerous methods of preparation and here is mine.

I added a handful of coriander leaves for color and flavor 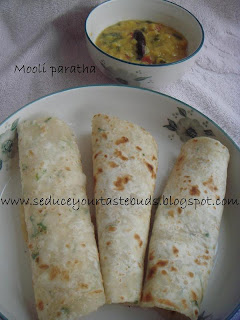 Note:
You can refrigerate the dough for later use too.Put it in a ziplock bag and place in the fridge.You can also store it in an airtight container.
When you want to use the dough,take it out of the fridge and leave it out for 15 minutes or till it is soft,knead with a little flour if sticky and make parathas.